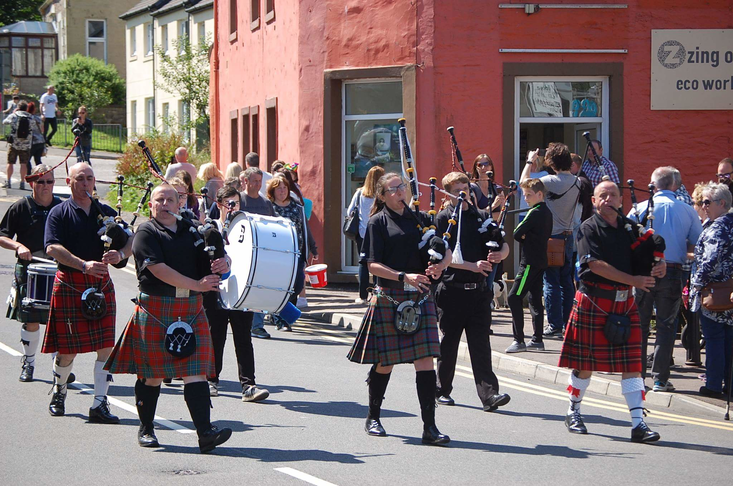 The band was formed in 2017 to play for communities who seldom experience a pipe band in their town or village. We are funded by band members, donations and from public appearances. We need to buy uniform and equipment to improve how the band looks and sounds and to allow us to perform more often. We have supported events in Tarbert, Carradale, Lochgilphead and Glenbarr, charging no fees. We will have more venues soon. We also plan to start volunteer run tuition for children in 2018.

Great to read the band are supporting tuition for young kids in 2018 , the way to go and a great asset to the community , well done Brian Lawson

So far, several members of Loch Fyne Pipe Band have bought their own kilts, and the band has bought some too. We have spent almost £800 on capes to protect us against inclement weather. We have also bought some socks and flashes. However there's so much more to do. We are planning on running some fund raising events soon.

A fabulous asset to the local communities. Great to see so much enthusiasm and obvious enjoyment within the band. Tuition/playing without the need for competition is exactly what our youngsters (and not so young) need and should be actively encouraged.

It was great to meet you at the Funder's roadshow yesterday and hear more about the pipe band - could you explain why your fab new band complements all the other amazing bands in Argyll and Bute?

I'm not quite sure what you mean here Antonia. Our aim is to provide an experience for members of the general public. In essence I suppose that by appearing in locations that the other bands in Argyll do not, we complement the total volume of possible venues and dates overall. By concentrating solely on community, we have dates available that other bands do not. By offering tuition we effectively increase the amount of teaching places, so that does complement what other bands do.

Thanks for your kind words Arthur Graham. There were 4 of us who kickstarted this band off and it has been hard work (and indeed a challenge) for all of us (including those who came along later) to get to where we are now. However, we still have a long way to go, but we are determined to do this for communities throughout Argyll. Without public support it is difficult for a pipe band to survive, let alone flourish. So it's crucial that we demonstrate our resolve as well as our music.

As someone who grew up in Tarbert, I ahd to travel to Lochgilphead to the closest pipe band. John has done a phenomenal job in getting this project off the ground and the band deserves all the hlep they can get. They are a true "community pipe band", not a pipe band that is subject to the wishes of sposnors.

Loch Fyne Pipe Band were a real highlight for our son's wedding in September. He and his lovely wife together with all the guests at the wedding were thrilled that this excellent pipe band were present for such a special day. The band were very accommodating and approachable. We wish them every success.

It is great to have a band in the area getting up and running that wants to purely play for the enjoyment of the music and take genuine pride in pleasing those who want to listen. Tuition will be a big step forward and a great investment for the future.

first seen them at Viking Festival 2017, great bunch of committed people and very interested in making the band, and being a real part of the local community. Quite good musicians too.

Fantastic people playing for the pleasure of the communities.... How lovely to ensure that the music of Scotland's soul can be brought to us all. Thank you 😀

This is a great community band for like minded people who just want to play for enjoyment. It has brought my son on with his confidence and he will now play in front of people. Great for the community.

Fantastic community band playing for pleasure. Kids have the opportunity to play as part of a band without having the stress of competing. It's bringing the younger and new players on leaps and bounds and growing their confidence. Great band to be part of.

Loch Fyne Pipe Band is a great asset locally to Tarbert and the wider communities appearing at engagements for no more than what they can collect in the bucket & has always been recieved positively. As the band branches out to making tuition on pipes and drums available, the more funding raised will allow for lessons to be offered without financial commitment, allowing everyone from every circumstance the same opportunity to come together to express the love of the music and the community.

Loch Fyne Pipe Band has attended a number of events in the area and is a great asset. To teach children to play will help to keep the tradition of pipe band music alive.

Pipe bands are expensive to run - almost £1000 per member initially. Loch Fyne Pipe Band has attended community events when other bands chose to compete. We are the only local band to put community first. We have members from Campbeltown & Carradale and up as far as Benderloch but we are based & practice in Tarbert. Our aim is to extend the culture of pipe band music and to offer tuition to anyone (adults or children) for no financial gain. The band has grown from 6 to 20 members in 6 months.